Welcome to Erik’s DeliCafé.  There’s been some changes since we opened in Scott’s Valley in 1973, but what hasn’t changed and never will is our commitment to our customers.  Our pledge of a warm and inviting atmosphere, and quality food served fast with friendly service is practiced in our stores everyday.

Sandwiches are made with high-quality meats, savory cheeses, and fresh produce.  Our slow-simmered and hand-crafted soups, made to order fresh salads, and wonderful bakery goods are made from scratch with my family’s recipes.  Only the freshest ingredients are used.

We look forward to serving you time and time again. Bring friends and family to share in the hospitality and goodness of Eriks’ DeliCafé. Here’s to your health!® 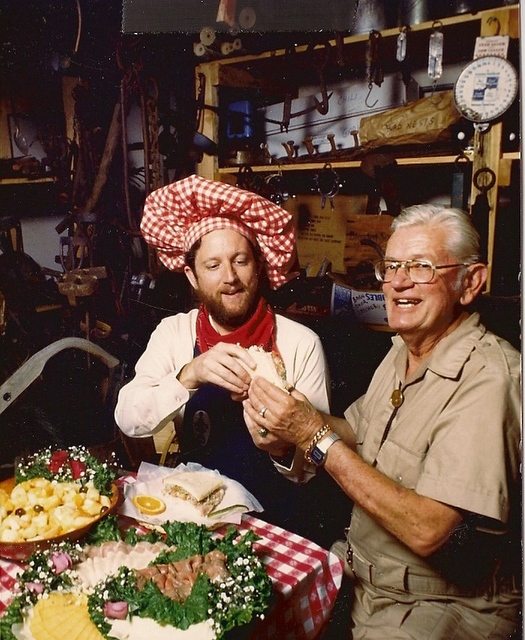 After receiving a Bachelors of Science degree in Business and Marketing from the University of Oregon in 1968, Erik Johnson, born in Oakland and raised on the Monterey Peninsula, moved to San Francisco and began working as a cost accountant. In February, 1969, Johnson went on a six month backpacking trip that took him across Europe and North Africa. Upon his return, Johnson worked as a security officer, a cook and food server at a small burger and shake restaurant and as an accountant. In January, 1971, Johnson relocated to Santa Cruz and ventured into real estate. As it became clear that he was not suited to be a realtor, Johnson began to have ambitions of opening his own business. In September, 1973, after making unsuccessful bids on a health food store, ice cream shop and doughnut shop, Johnson purchased a 600 square foot location in Scotts Valley for $429. Borrowing the amount from his father, Johnson signed a note to cover equipment costs and took over the lease of the former Tartan Bakery. Lacking experience in the restaurant industry, Johnson quickly enlisted the help of his family. Ray Johnson, Erik’s Father, created homemade soups, his mother, Dolores, and his sister, Laurel, made deli salads and baked goods while his brother, Chris, an attorney, handled the lease negotiations. Judy, Johnson’s wife-to-be, worked behind the counter and helped with personnel, hiring, training and catering. Even Johnson’s brother-in-law, Rick, chipped in with his carpentry skills. In the following year the neighboring TV store closed and Johnson was able to expand Erik’s Deli to 1800 square feet.

Growth and a Bright and Growing Future

With the expansion of the first Erik’s in Scotts Valley, Erik was then ready to take the next step, opening a second location in Capitola in June of 1976. After the success of the second Erik’s, a third Erik’s quickly followed with Erik’s DeliCafé of Aptos opening in October of 1977. The very next year, Erik’s expansion in Santa Cruz County continued with Erik’s DeliCafé of Santa Cruz opening in June of 1979.

After opening four Erik’s in Santa Cruz County, Erik and Erik’s DeliCafé took the next step, opening a location outside of the County. Erik’s DeliCafé of Los Gatos opened in March of 1981.

The 1980s was a period of growth for Erik’s with locations opening throughout San Jose, Santa Clara and San Mateo County. The 1990s saw further expansion for Erik’s including the opening of Erik’s first “general store.”

Erik’s DeliCafé of Santa Cruz – Soquel Drive opened in November of 1994 and was the first Erik’s to be designed as a “General Store.” Although there was no barnwood, Erik’s father Ray Johnson still provided the decor that remains at the location today.

Over the past couple of years, Erik’s has undergone further expansion, opening many more DeliCafés. These new DeliCafés have a fusion of the Erik’s antique, turn-of-the-century atmosphere with a modern design and feel, with an open floor plan.

How the Abbott’s Habit got its name:  Named after Chuck …